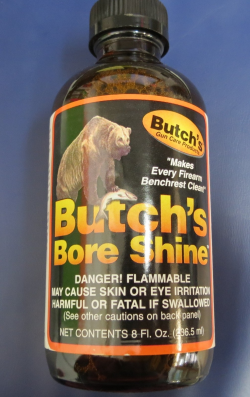 Butch's bore shine is specially formulated non-abrasive chemical solvent designed to remove all forms of bore fouling with a minimum of effort. It quickly removes copper, lead, powder residue, and plastic fouling, often without brushing. Scientific bore scope studies performed on competition barrels cleaned exclusively with butch's show no indication of cleaning abrasion. Butch's is recommended by several barrel manufacturers and endorsed by many top shooting competitors across the country.

Designed by well known bench rest competitor Butch Fisher, this non-abrasive chemical solvent is specifically designed to remove all forms of bore fouling including copper with an absolute minimum of effort and no damage. It will quickly remove carbon build-up, even in difficult to clean areas like the chamber throat. It also removes lead, wax and even plastic shotgun wad build up.

A significant improvement over conventional solvents, Butch's can also control the copper fouling by pushing a few patches soaked with Butch's prior to shooting. Butch's is safe to use on normal and stainless barrels. It is a true "All in One" Cleaner.